During the 4th century in the Roman World, Christianity gained a new, legal, and eventually politically supported place within Roman society. Through the use of coins it is possible to gain a better understanding of the context, ‘mood’, and evolution of a Christianity that functioned very differently than today.

It is the purpose of this virtual exhibit to discuss the rise of Christian imagery on coinage from this period of history. To this end, this exhibit has been organized by both the different symbols which appeared on the coinage and also in a chronological fashion in order to allow visitors to explore this material as they wish. As educational and explanatory aids, both an interactive map and a timeline have been included on this site. 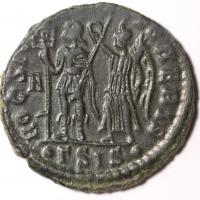 Obverse: Draped bust of Vetranio laureate, right, with cuirass; to left, A in field. 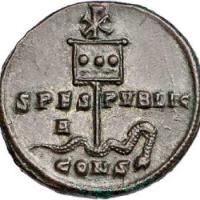 Reverse: Chi-Rho labarum piercing serpent on ground; legend across middle; to left, A in field; CONS…